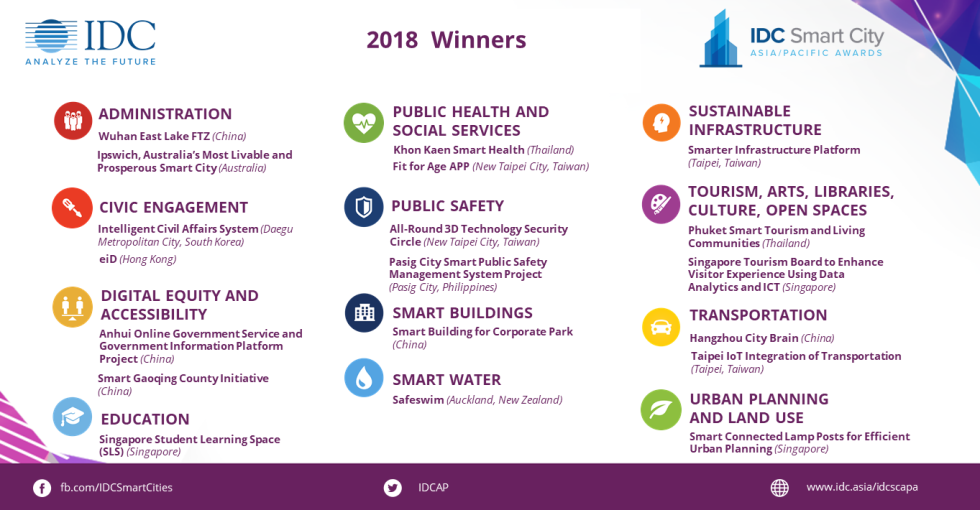 China has emerged tops with five out of 19 winners in the 2018 IDC Smart City Asia Pacific Awards (SCAPA). Taiwan and Singapore were next with four and three awards respectively across 12 functional categories.

IDC Government Insights went through a rigorous six-phased benchmarking exercise to determine the Top Smart City projects for 2017-18. These included identifying and cataloging the key Smart City projects in Asia/Pacific by IDC analysts across APeJ (50 percent), online voting to determine public opinion (25 percent), and the assessment of an International Advisory Council (25 percent).

“Even as municipalities globally are not the flattest, most agile organisations, city leaders should take the lead in rolling out viable and sustainable initiatives to transform traditional bureaucracies. They should not fall into the trap of waiting to be the last mile beneficiary of industry-wide innovations. Inevitably, strategic and operational silos will not bring about an enviable future ecology of ‘live, learn, work, and play’,” said Wang.

IDC believes that cities with agile operations, constant capability building, long-term investments in innovation for relevance and competitive advantage, as well as an open and collaborative ecosystem will pave the way forward in socioeconomic growth and excellence.